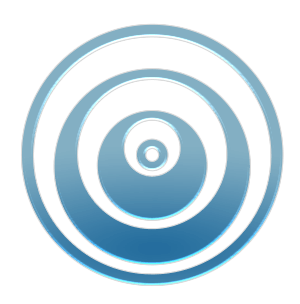 Breakers (Air / Resolve) is represented in the control and disruption of opponent movement. Tacullu messes completely with formations, giving the feeling that structure versus Tacullu is pointless as she can just completely manipulate the opponent units (and hence the battlefield) to her liking.
Breakers constantly disrupt formations and more importantly disrupt the formations protecting the opponent's summoner, allowing Breakers to poke them until they are dead.

Most of the Breakers deck is composed of formation and movement alteration tools, coupled with high damage, ranged units to destroy vulnerable enemy units with little fear of counterattack.
Breakers have a counter-play style but are a versatile deck.  If the opponent is sitting back, push them, if the opponent is the one pushing, play defensive, if the opponent is poking from afar, counter-poke.

If Tacullu has a weakness it is that she doesn’t have any explosive strategy. Even if given room and time, she can't pull off crazy combo turns that provide great value.

The deck's power comes from interacting with enemy units on the battlefield, keeping up a constant disruption of opponent plans and formations.
Maintain this constant interaction, moving enemy units out of place, making those that are in a place they want to be, come under Breakers' control, and ultimately use all of that to create positional weakness for your opponent where their summoner is then exposed.
Breakers can push very hard, lead by Tacullu with the threat of her Mind Control event and using her Mind Capture ability to take every position that is (was) good for the opponent.

Or they can play a very safe, ranged poke game, keeping pressure from a distance with Wind Mages and/or Wind Archers, protecting them with Deceivers and Tempest and when the opponent comes for them, punishing with cards like Blast and Mind Control.

Identifying when is the correct moment for each strategy is a big part of learning to play Breakers effectively. 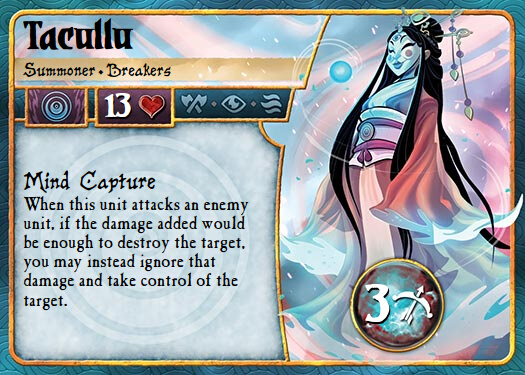 Tacullu's Mind Capture is not a "straightforward strong" ability, compared to other summoners' abilities, rather it is deceptively / indirectly strong. The true power of it isn’t that much economically, but rather positionally.

Tacullu's Mind Capture can turn a unit in a good position for the opponent into a GREAT position for you.
Enemy units in front of their gates ... now blocking that gate.
Enemy units protecting their summoner ... now becoming their assassin.
Enemy units threatening your summoner ... now protecting your summoner.
Mind Capture also allows you to get an attack in where you wouldn’t otherwise, and in general disrupt formations as Breakers love to do.
It’s not an economic ability, in general if the game enters a slow state you are better off just killing the unit, but if the game is at a moderate or fast pace, Mind Capture allows you to gain tempo and positional advantages very cheaply.

Mind Capture is both an offensive and defensive ability.  Mind Capture on offense helps to convert enemy units into personal assassins or gate blockers.

Mind Capture on defense can allow you to turn the tables, Tacullu instead of being surrounded by enemies can suddenly be surrounded by allies.

Don’t be afraid to position Tacullu very aggressively, Mind Capture can help you be pretty safe and aggressive positioning increases the threat of Mind Control. 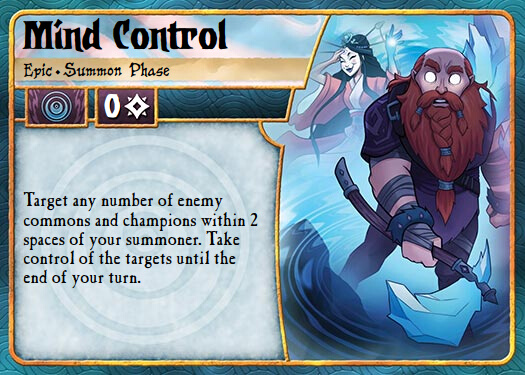 Mind control is not a particularly powerful Epic Event.
But as Tacullu’s ability it helps both in defense and offense, and it can be a tremendous threat. When it is time to attack, often Tacullu can push forward very fast with the threat of Mind Control, and a summoner that wants to rely on units to protect itself may find those units become a threat rather than a protection!

When pressured too much, Mind Control can provide some relief and space for Tacullu. It’s very hard to rush against Tacullu because of the threat of Mind Control. 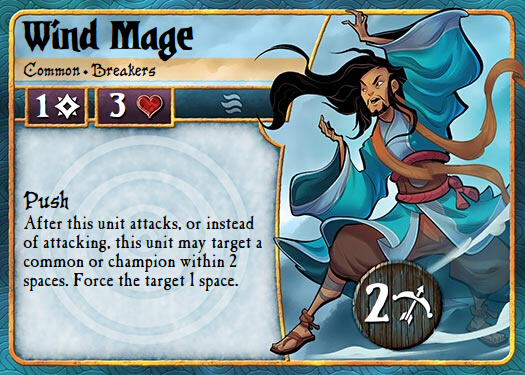 Wind Mages are the pillar of the deck, a unit you always want. You always want to have at least 1 active Wind Mage on the board, it doesn’t matter what is going on with the game, they are always very useful, while also having solid stats.

Don’t fear to just blindly summon a Wind Mage in a corner, you will never regret having a few of them around.  They combo with everything! 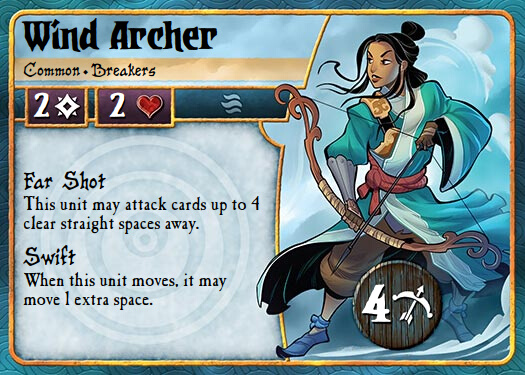 Wind Archers are the damage dealers of the deck. While quite squishy, their movement and reach make them extremely hard to kill, especially combined with a Wind Mage, Deceiver or Perplexing Tempest support.

Don’t be afraid to have them very far from the action to maximize their safety. When needed, they can get into attack position with ease, thanks to their speed and range.

They also tend to be the finishers, combined with Hypnotic Call and Blast, they can find their way to deal the last wounds to the enemy summoner and clinch the game. 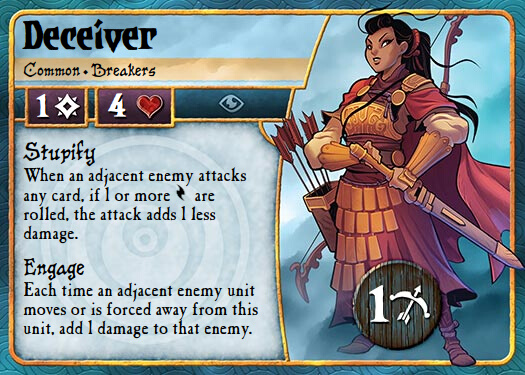 Deceivers are an essential part of the deck, even if they are not particularly powerful on their own. It's the only unit that is not easy to kill among the Breakers. They are particularly good versus low attack melee units. However they are vulnerable to ranged attacks. Generally in range wars it is better to attack with your Wind Archers and hide them behind a gate with the help of a Wind Mage, than to put a Deceiver in front. Still that option is not always available and so a Deceiver can serve in such a scenario.

Deceivers' Engage combos very well with Push, Blast and Hypnotic Call.  While they may only have a base strength of 1, those combos allow them to still bring decent damage output to Breakers. 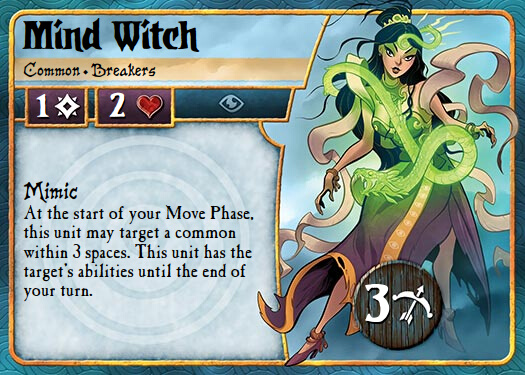 Mind Witches are the cheap damage of the deck and they combine well with Wind Mages when you need high damage as you can attack with a Wind Mage, put a Mind Witch in front and then shoot for a total of 5 ranged strength, and yet in the counter-attack you only lose a 1-cost common.

Mind Witch's real terror is that they can often copy extremely powerful abilities, like a Cave Goblins Slinger, in which case they can just out-value everything in the game.
Remember, Mind Witches can copy your own units when needed. Even copying Deceivers for Engage can be useful combined with Wind Mages or Blast. 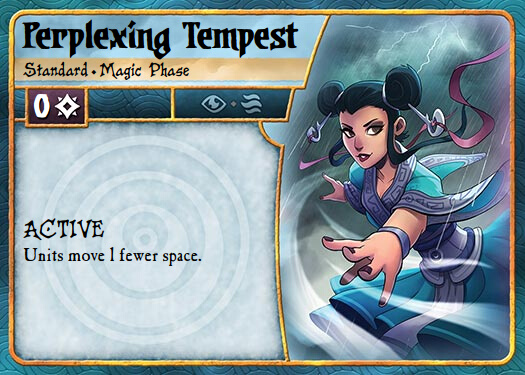 First it prevents a strong counter-strike from your opponent's melee units:  You can play Tempest and newly summoned units can’t reach your units.
One of the reasons it is dangerous to not pressure Breakers is that it gives them space and time to set up a very good Perplexing Tempest, which can be a big turnaround point.
A turn where all of your units can attack and then your opponent can’t reach them, is a game-winning turn a lot of the time.

The second use is to make it harder for the opponent to retreat.  Sometimes you can maneuver Tacullu close to the opponent summoner, and as it would like to retreat, you can just play Perplexing Tempest and make that retreat very hard, setting up for a powerful Mind Control and/or other shenanigans for the kill. 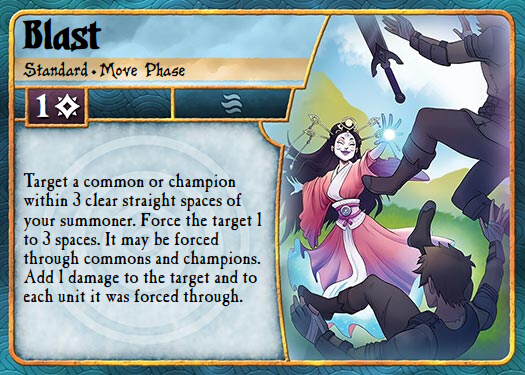 Blast is hard to get good value from because it’s expensive. But it can single-handedly turn games around.
It is particularly punishing versus champions as it can drag them around to be setup for a OTK (one turn kill), but is also strong in general to disrupt formations and often can serve as the final push for an assassination, by sending that Wind Archer or Gulldune behind enemy lines to do the final hit on the opponent summoner.

It’s not a card to hold on to much in the early game, as it’s harder in the early game for good Blast situations to present themselves. As the game develops though, those situations become increasingly common with more units on the field, summoners with low life and champions being more present. Blast then becomes a potentially game-winning threat.

Be aware of its combo with Deceivers, blasting a champion through a chain of deceivers can OTK them. 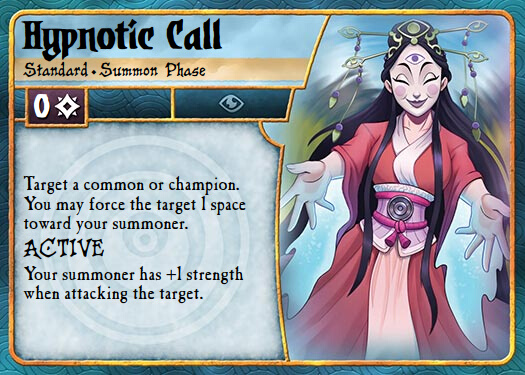 This card's potential impact is not usually very high, but it is relatively easy to use, and extremely versatile, because of its infinite range. It’s relatively easy to find situations where you want the opponent unit in a different place. It’s particularly strong when wanting to assassinate, as it can move a unit that is protecting the heavily damaged enemy summoner, out of the way.

When on defense, disrupting formations is always nice and often a way to get an extra attack, since instead of using a Wind Mage to move that unit from the front of your gate, you can use Hypnotic Call and then attack it with Tacullu to try for the dream of capturing a 3 or 4 life unit. 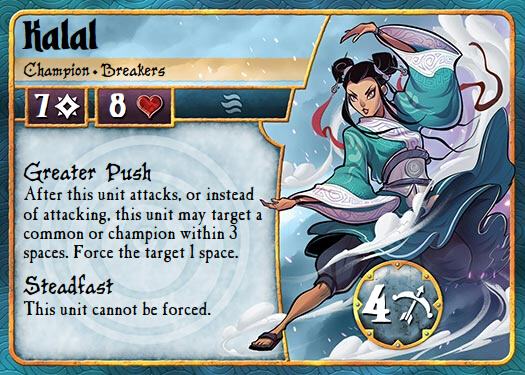 Kalal is the grandmaster of slow-paced, ranged combat.  If the game is getting into a slow pace, Kalal's entry can change the odds greatly in Tacullu's favor. She may seem relatively expensive, but with Kalal, losing slow-paced, ranged combat seems impossible.  She can keep enemy melee units at bay while attacking with four ranged dice, or protect herself with cheap friendly units, that can then attack also after she puts them in position, altogether doing lots of damage from a single flank and not leaving a good counterattack opportunity for the opponent.
Trying to keep a slow game versus Kalal may be the same as conceding. 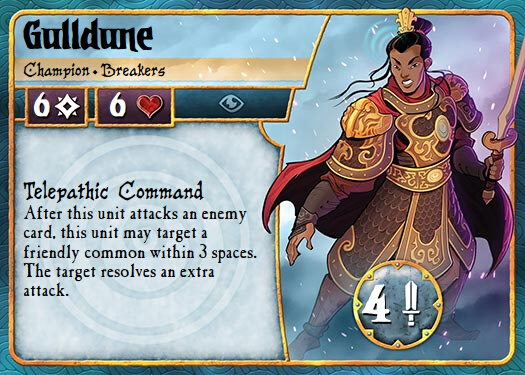 Wise opponents will correctly try to increase melee contact points versus Tacullu and the best response is Gulldune.  Gulldune is extremely good at melee combat. If combined with Wind Mages, he can provide a lot of damage while making his 6 life seem higher than it really is. Use Wind Mages to protect him and leave him always with no more than one open flank.  The amount of value Gulldune provides each turn is considerable and he can out-value bigger and beefier champions with ease. 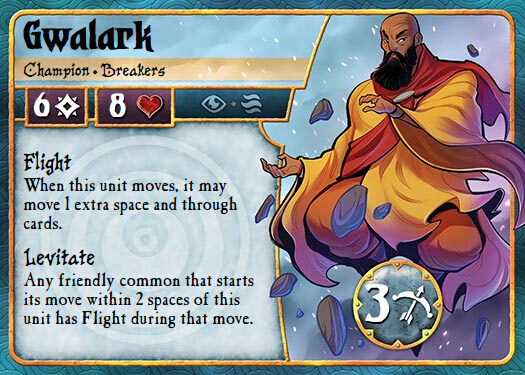 Gwalark can lead an assasination charge against a damaged enemy summoner. When chasing a summoner for the kill, Gwalark provides inescapable reach.
By far the weakest of the Breakers' trio of champions, you should only summon Gwalark in very opportune situations as his stats for his cost are poor and if his abilities don’t add any value to your situation, you are better off spending your magic on something else.
However, Wind Archers that fly over everything at 4 spaces are incredibly scary for a damaged enemy summoner!
Breakers are a highly disruptive faction, ideal for someone that enjoys influencing opponent units and frustrating enemy strategies to no end.
Since a big part of their power comes from their versatility, it also means that to play them well requires a good read of the state of the game in the moment to know when to switch gears from full defense to full offense.
Also, since most events require proper Tacullu position, Breakers require knowing when and where to risk her to be able to maximize her events.
If Breakers aren't aggressive enough with disrupting the opponent and instead let them play at their pace, they will find themselves quickly outvalued.
So don’t let the opponent breathe, since every breath they take is a step closer to you losing.  If properly played, Breakers can be so disruptive that the opponent will feel helpless.
Copyrights for the Summoner Wars logo and art belong to Plaid Hat Games, used herein with their express permission.
PlaidHatGames.com