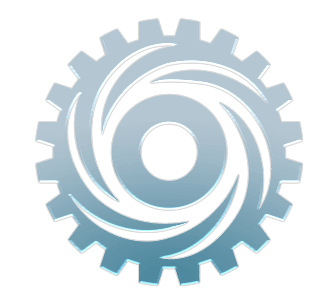 Cloaks is a very versatile deck that can play a lot of strategies, from the extreme swarm offensive, to an absolute defense, to an economy game based on overpowered stacked-up units.
But behind all of that noise, its biggest weapon is the ever-present potential to assassinate the opponent Summoner from nowhere.
As the most versatile faction released so far, it is hard to talk about basic strategy with Cloaks because their basic strategy is “all of them”. It really depends too much on the matchup, cards drawn and game flow. But let’s talk about the tools this faction has for each of the 3 basic gameplay styles that exist in Summoner Wars.

Offense:
Cloaks can play a fast offensive game, thanks to their overall cheap cost, having a solid starting setup, and lots of mobility, thus able to quickly reach the opponent's side and even the opponent Summoner, while using survival tricks to keep things going. Rustside Bandits with their cheap cost and high life can easily take spots, supported by Guild Gunners that allow units to reach their destinations faster. If Cloaks can create enough pressure, they can force the opponent Summoner into a bad spot to then land a game-ending Out of Shadows.

Defense:
When playing defensively, Cloaks can realize the full potential of Guild Machinists since it’s easier to have movements to spare when in defense.  Vlox+Machinist on the defense can allow Cloaks to have an unfair number of attacks to dismantle enemy offensives. In addition to that, it is dangerous to bring the Summoner close to the offensive lines versus Vlox since one mistake can easily be all that is needed for Vlox to surround and kill a forward-playing  Summoner.

Economy:
Cloaks have two main ways to win an attrition war against any faction.
The first is to buff a unit with 1 or 2 "pieces of equipment" in the form of Hand Cannon and Moto Boots, then copying that unit with Vlox.  Thus having a “super unit” and an overpowered Vlox to out-value the enemy.
The second is simply making use of Guild Snipers and Gunners abilities to poke the enemy units while offering only the cheap but tough Bandits in return. 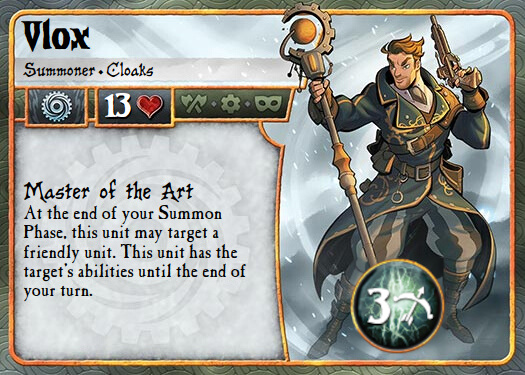 Vlox is obviously not a support summoner but a combat summoner and needs to be involved in the action to get value. You don’t need to involve Vlox instantly, but at some point he needs to get involved to get his full potential. Preferably when copying units that have equipment. On the defensive, Vlox can copy Sniper/Gunner/Machinist to be an efficient yet hard to reach cannon.  Or on the offensive, Vlox can dive deep and eventually retreat to safety thanks to copying Sin-Sin's and Bandit's abilities. 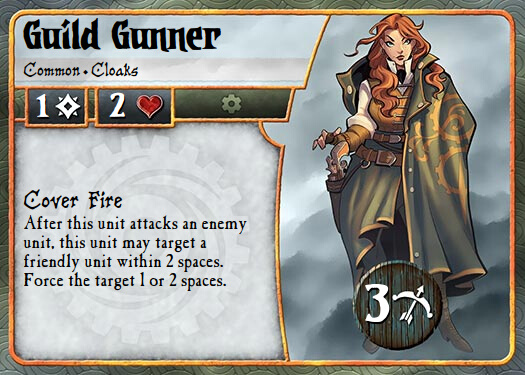 The core unit of the Cloaks, providing extra movement in every attack phase and not only having its own good offensive stats, but also able to use it’s ability to put Bandits in front of them for protection.
Gunners have a lot of use, from poking and getting protected by Bandits, to helping units to steal places after attack, to reaching otherwise impossible places.
The efficiency of Gunners is extremely high and no matter your strategy you will want to use Gunners for their stats and extra movement. 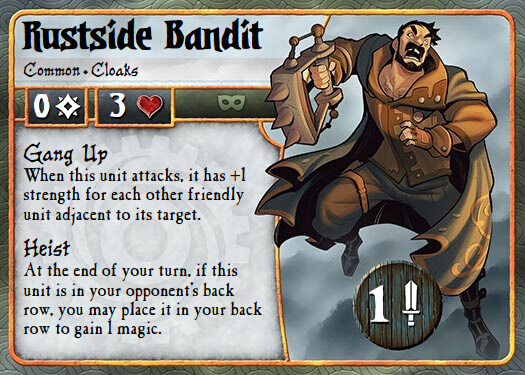 Bandits are the cheap "meat shield" (enemy attack absorber) of the Cloaks.  With a life efficiency of 1.5 per magic, they are perfect to cover spots. It has two abilities, neither being the main use for the team.  However, because of those abilities they are a meat shield that can’t be ignored, making them extra scary. 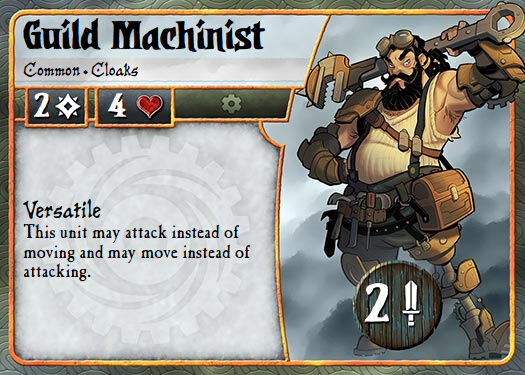 The brawler of the deck, working more on defense for damage and on offense for movement. Be careful because they are very expensive for their stats, summoning only 1 or 2 Machinists is reasonable in many games. This is especially true because a big part of their value is giving Vlox a very good ability to copy. However its statline is poor and it’s ability is not always easy to use.  If you can’t find a way to use it’s ability, (not an uncommon situation) then summoning a Machinist can be a very bad decision.
However, if the positioning is right or you have Moto Boots, then a Machinist can allow you to perform extra attacks to quickly tear down the enemy. When playing on offense, you can use Machinists to steal positions by moving after killing a key enemy unit. 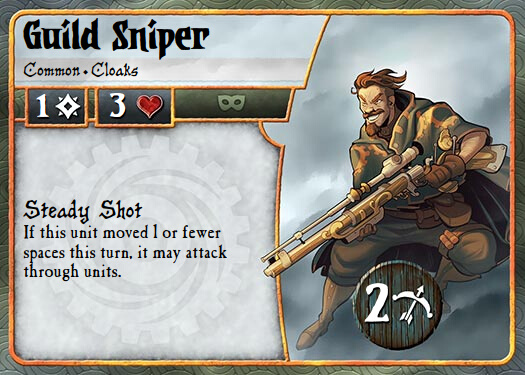 The Sniper is a utility unit, able to provide extra damage on a single flank. It’s particularly good when equipped with the Hand Cannon event, and also a good target for Vlox to copy so he can add extra ranged attack support from safety.
Guild Sniper's life is decent so don't be afraid to expose them to enemy fire to reach a target you want to finish. 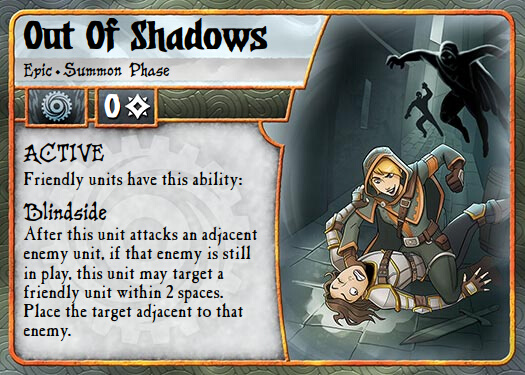 The Epic Event of Cloaks has a lot of utility. The main one is being a threat to the enemy summoner and that it can quickly rush the game to a “kill or die” situation, but there are more uses than that. This event has no cost more than just the card, so don’t be afraid to use it to just position units in more convenient places, like Rustside Bandits in the middle of the lines to cover for you or having your Machinist attack during your Move Phase and then bringing another Machinist over to be able to attack in the Move Phase also.

Out of Shadows is so versatile that you should almost always use both copies as long as you don’t obsess to get max value on every use.
Sometimes it can be the ultimate finisher, but sometimes it will just be there to help you organize your units into better positions and that's okay too. 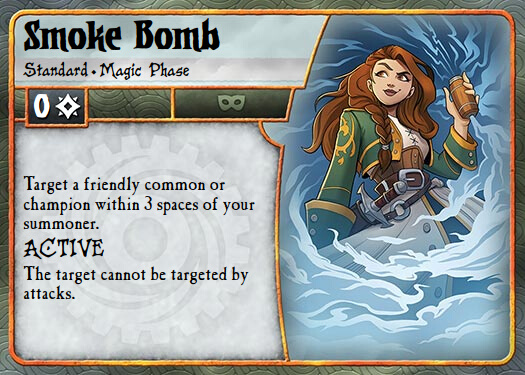 This event can be nasty, creating horrible turns for your opponent, often thanks to Guild Gunner or Out of Shadows, you can put a unit (even a champion) in the middle of the enemy frontline, and then use Smoke Bomb to nullify your opponent's turn.  So often a must-use event as it is so capable for Cloaks in shutting down opponent effectiveness. Remember, if you just manage to prevent a single attack from your opponent, and force your opponent to only do 2 attacks, it is already worth it.
Smoke Bomb is also a great tool to protect your units that have Moto Boots and Hand Cannons, which would otherwise be priority targets for your opponent. 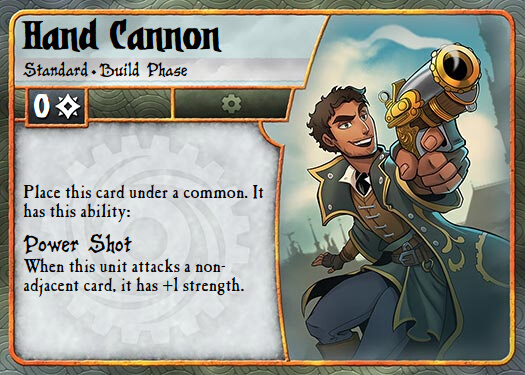 This is a relatively low ceiling event that is also easy to use. Just throw it on some Guild Sniper or Gunner that is well protected and that is already a good use.  1 magic for +1 strength on a hard to kill unit is a big deal and a Hand Cannon will be key to making Vlox extra scary as he copies it.
One strategy is to use Hand Cannon on a Machinist, not to make the Machinist better (as it does nothing there), but to make Vlox really scary when copying that Machinist, especially if the Machinist also has Moto Boots. 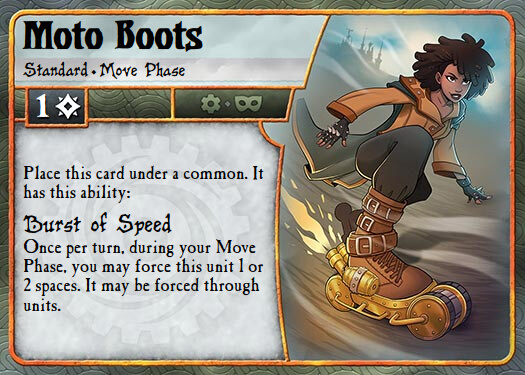 This event is hard to use, because it’s expensive and if you get only one use then often it is not worth it. However, sometimes it’s still worth it anyway, especially when Vlox will be copying the unit with the boots.
Generally the best use of Moto Boots is on a Sniper or Gunner that can safely use it while Vlox can copy that unit to use it also. However, because of how well it combines with Machinist, often they are the best target, especially when they can be covered by a Smoke Bomb. 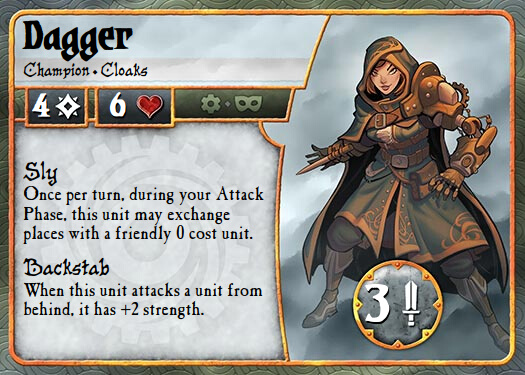 In a way the easiest champion of the Cloaks to use because she is so inexpensive. Dagger can go from good to extremely good, her cheap cost + Sly + 3 damage is already good enough, giving you decent stats and all the advantages of Sly.  But when she can use and abuse Backstab, she can get crazy, especially with Out of Shadows.
Dagger can create the triple backstab to a summoner that works like this:
Get Dagger behind the target and attack, Sly with a Bandit and attack, Sly the Bandit for Vlox that has copied Dagger and attack. And you now have 10 dice on the enemy summoner. This probably will require Moto Boots or the help of a Gunner or Out of Shadows if you skip the Bandit attack.
Very good value, always try to summon Dagger, even if you don’t plan to Backstab, but for sure go for it if you can. 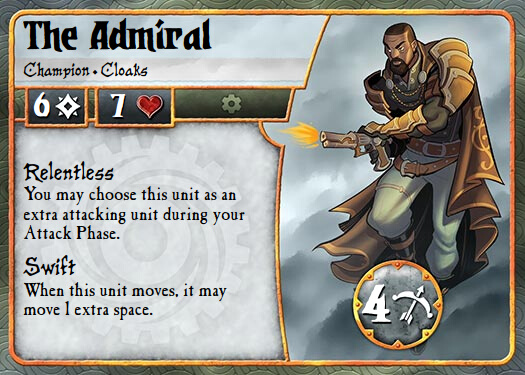 The Admiral is the big gun of Cloaks, with a high 4 ranged strength that doesn’t consume an attack, enough said!  If you have 6 magic, The Admiral will quickly pay for himself. There isn’t much to say, he is just an efficient pile of stats with quality abilities. 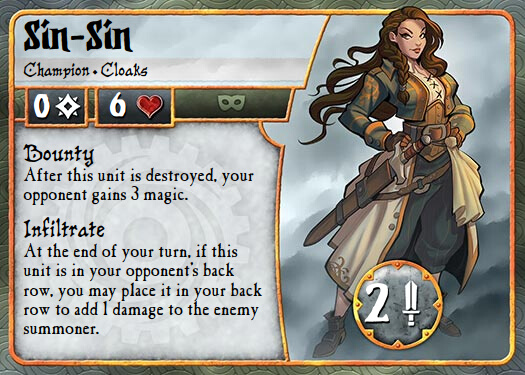 Sin-Sin is a weird champion with different roles at different stages of a game.
Early game she can be a tempo play that allows you to get ahead in stats on the table because of her “delayed” cost.
Mid game she is decent damage absorption.  If you time her right you can soak damage with her and then move her out of harm's way, hopefully by reaching the opponent's backline to use Infiltrate.
Late game she can be a value play, as when played late your opponent may have no use for the magic from Bounty even if they kill her, thus she becomes a very efficient 2/6 for 0 cost!
At every stage you have to check if the conditions are right to fulfill her mentioned roles, otherwise you should happily discard her.
Cloaks is a tremendously versatile deck with a massive threat of assassination thanks to Out of Shadows and a lot of tricks, no matter the plan that threat should be a part of the menu, but Cloaks can play any strategy in the game thanks to their versatility.

The fact that they can change and adapt to the opponent is their major strength.
But no matter what you do, if your opponent does not have to fear the ever-looming threat of their Summoner or big champion being surrounded and killed, then Cloaks are not fulfilling their full potential.
You can ping from afar while protecting your units, rush your opponent and put them against the back row or use Machinist and multiple tricks to surround and outflank the enemy units, always ready to jump on the opponent Summoner for the kill if it makes a misstep.
Copyrights for the Summoner Wars logo and art belong to Plaid Hat Games, used herein with their express permission.
PlaidHatGames.com