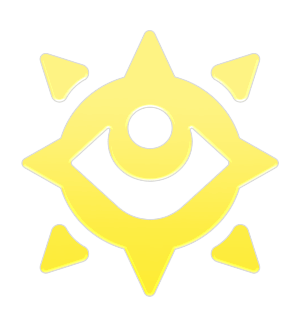 Eternal Council Resolve / Light is represented in a deck that draws a lot of cards to build up the hand and board state that they want, all while controlling the board to set up that state.  It tries to find a perfect moment to execute a combination of cards that maximizes the value of its events.

Draw a lot of cards to find the combination you need to deal a lot of damage to the opponent board, clearing threats and opening the path for Edia to attack the opponent summoner or opponent gates.
You need to consider your hand and board to know if it’s time to “fire off”. Firing off means playing Insight, Psychic Assault or both and drawing lots of cards to power them up.

When the right moment is, depends on having enough boost on Edia, having draw potential, having the mentioned events, and having Edia in a position that can get value from them.
What to do until that moment arrives? The most important thing is to try to build up Edia’s boost to be able to keep events around for more than one turn, but also controlling the board and slowing down the opponent using Mind Knights and Enigma Sages.

Ovi is a Plan B. Ovi can be a powerful threat while Edia is offline.

If after your deck is depleted you haven't won yet, Katu can come into play to be the final threat of the Eternal Council. 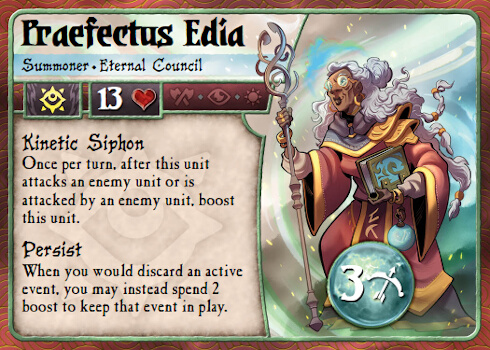 Edia is a pure combat summoner, one of those summoners that wants to do everything and the rest of the deck is mostly composed of cards to support her.  It can be very hard for your opponent to attack her because that means more boosts on her, so don’t worry overmuch about slightly exposing her as you will have to put her offensively in the right place anyway to maximize value. Just try to use Citadel Advisers and Mind Knights to keep her protected. 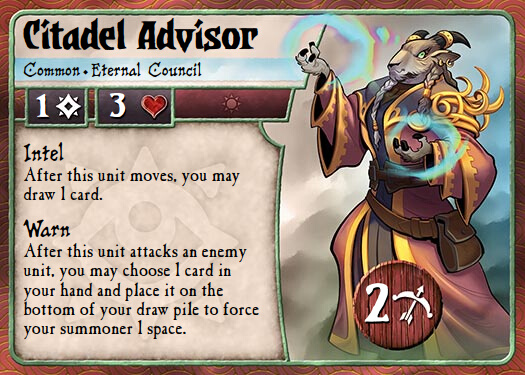 It can be argued that this is the most important unit of the Eternal Council as it’s the main way to support Edia. Citadel Advisors can allow Edia to get where she needs to be to attack an enemy unit and get one boost, or can get Edia where she needs to be to make use of her incredible 8 strength attack when Insight is online and they can also allow Edia to be safe after attacking.

As an extra bonus, Citadel Advisors allows you to draw cards to setup your combo and fuel it. You should always try to have one Advisor online and maybe even two, and generally you will summon 3 or 4 Advisors every game because it’s just so core to Edia's plan as long as she is combat capable. 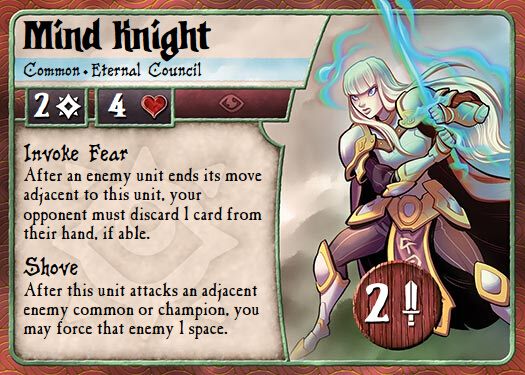 Mind Knights are a more situational unit, and shouldn’t be spammed, but their role is important to protect Edia, slow down the board and force the opponent into awkward positions.
Their Shove ability is great to put enemy units in the line of fire of Edia. Invoke Fear is conversely good to deter the opponent from attacking Edia.

It’s expensive and poorly stat’d, but if you can make use of its board controlling abilities it is then well worth the price. 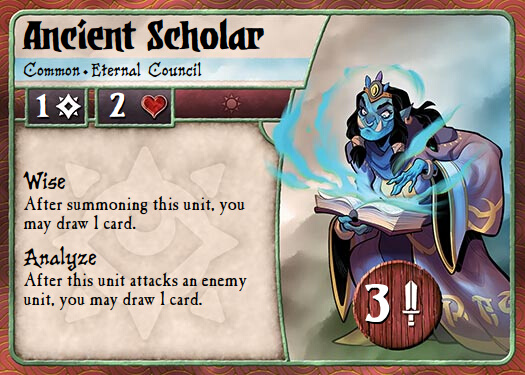 Despite their low cost, you shouldn’t summon many of them unless you really need some damage on board. Their real role is to make your Insight and Psychic Assault all the more powerful. So you want to have one of them when you play Insight or Psychic Assault, but other than that you probably are better off spending your magic somewhere else. They are cheap however,  and sometimes you just need a unit to do damage and they are fine for that with their capable 3 melee strength. 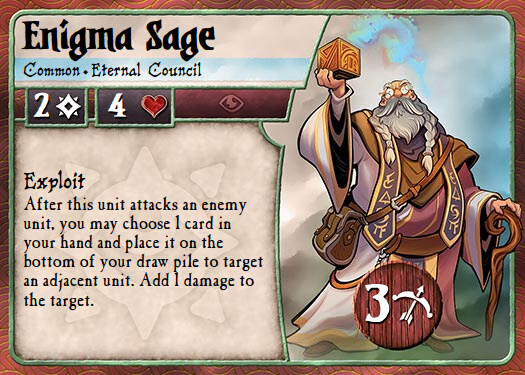 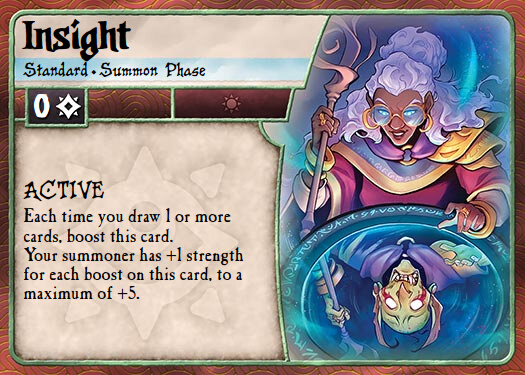 Insight can feel like the true Epic Event of the Eternal Council. As a lot of the deck works around getting 5 boosts on Insight and having it online for a few turns so that Edia can melt down champions, gates and the enemy summoner if possible. Generally you should only play one Insight per game as boosting it up requires effort and you only can create one big “Insight + expose Edia” moment per game. However, often it is fine to just play an Insight to get +3 strength or even only +2 on some occasions.
Once Insight is fully boosted, don’t be afraid to use it to melt down gates. That is a big part of Edia’s threat. 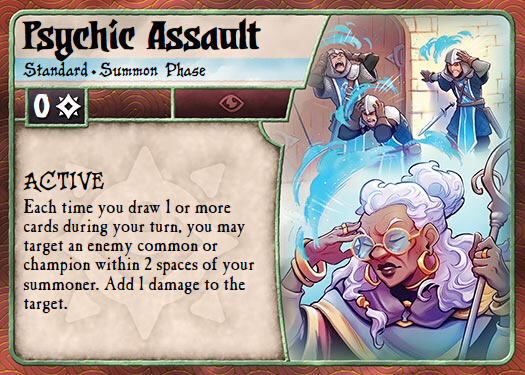 This is the event that scares most opponents as often it can really destroy everything around Edia. However, the short range makes it hard to set up. It is important to note that it can be used through gates. Keep this in mind because often Edia should get in the middle of everything to do a Psychic Assault, and then use gates both friendly and the opponent’s, to keep herself protected. 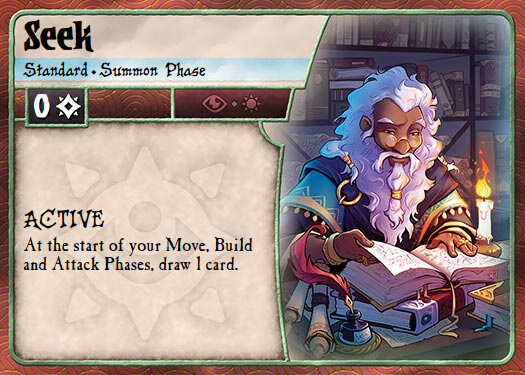 Seek is just an enabler. Mostly used to pump up Insight or Psychic Assault.  It can also sometimes be used to boost Dominus Ovi.
It is ill-advised to use it simply to draw cards, however, in some matchups you may need the tempo help and then it can be fine to just play for card draw, like maybe versus a very aggressive Cave Goblin opponent, drawing a lot of cards can help you stabilize. In general though you should only use Seek to boost up Insight and deal damage with Psychic Assault. 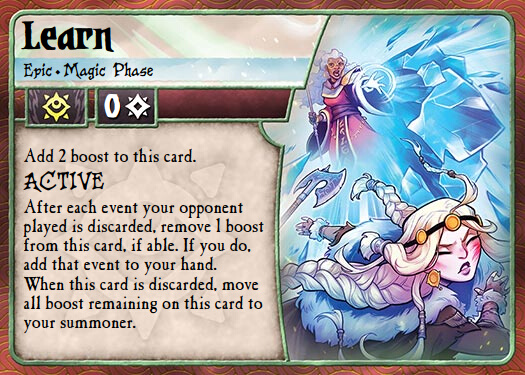 Learn is a little bit of an odd card. The main use realistically is just to add 2 boosts to Edia to be able to keep Insight or Psychic Assault one extra turn. However, this can be a very powerful card if it steals the right active event in the right matchup. Sometimes in some matchups it’s okay to keep Learn in-hand just waiting for your opponent to play the right active event and steal it.
While Learn is a nice trick to have, you shouldn’t overfocus on it. Generally you should just autoplay it, the 2 boosts are nice and even putting the opponent in the odd situation where they don’t like to play events in that turn is also a quality play. 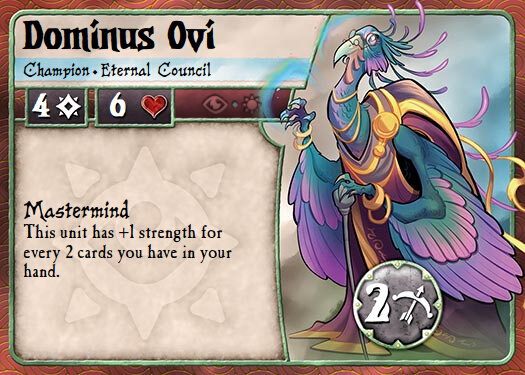 Dominus Ovi is a very important champion as it’s relatively cheap and gives you another big threat besides Edia. Don’t overfocus on powering it up. Just with 4 strength it’s enough to do its job. You should generally summon Ovi in most games as it’s quite cheap and gives some breathing room to Edia since Ovi can take the role of primary damage dealer for the Eternal Council. 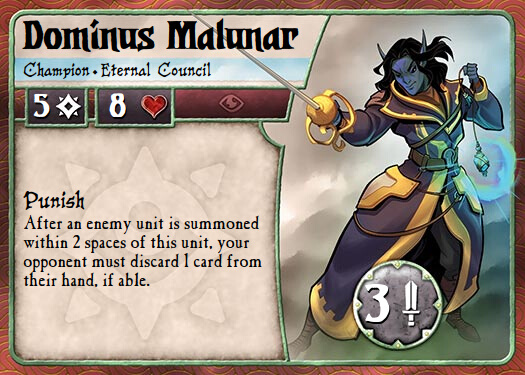 Dominus Malunar is a very time sensitive champion, if you are putting pressure on with Edia, then adding Malunar to the offensive can be devastating. However, it is often that too many things need to go right for Malunar to be the best call. You need to be on the offensive, the opponent needs to have few gates or gates positioned in the right places and you need to have the extra magic to spare. So this champion can be a rare sight. In general you should accept the situation won’t usually present and burn Dominus Malunar for magic.  Spotting those situations where Malunar will seal the game however can be very valuable. 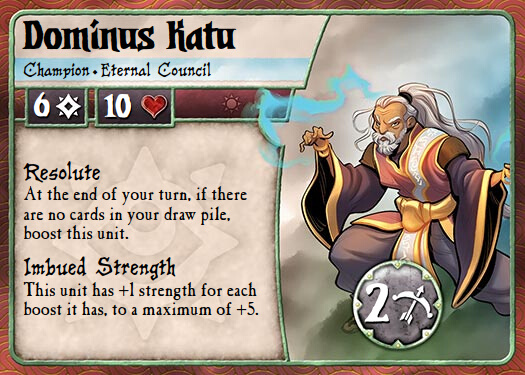 Dominus Katu should always be your endgame plan. Thanks to Enigma Sages and Citadel Advisors, you can always send Katu to the bottom of your draw pile where you need him, and when the time comes as most of the dust has settled, he can be a very powerful endgame threat. You should always count on Katu as your last threat of the game.
Eternal Council is a very linear deck in a way, it’s very focused on one plan and that is to make Edia a cannon of destruction that melts big targets. There are a lot of paths to get there and a lot of tools when things do not go right, as well as alternative plans like Dominus Ovi and Katu.
Just don’t lose focus on what the deck is about. Sometimes you get to that situation very swiftly but sometimes you get there after a lot of “dancing” with Edia and Citadel Advisors, pinging your opponent along the way and adding boost on to Edia.

It’s okay to even play Edia kind of defensively while you build up boost on her and arrange the perfect hand. Eventually at some point though if you want to make the best use of Edia, she needs to get in, threatening big targets with Insight and small targets with Psychic Assault. Don’t despair if that doesn’t finish the game though. Once Edia is too damaged or your deck is running out, you can count on Dominus Ovi, Dominus Katu and Enigma Sages to play the the rest of the game.

If you like combo decks or decks about setting up a hand / board state to where you can be explosive, then Eternal Council is going to be a lot of fun for you.
Copyrights for the Summoner Wars logo and art belong to Plaid Hat Games, used herein with their express permission.
PlaidHatGames.com