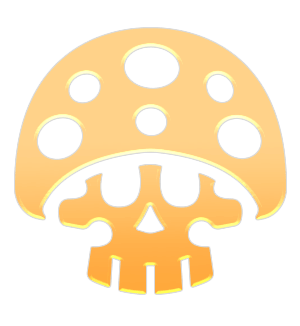 Fungal Dwarves Dark / Earth is represented in a deck not only unafraid to but actually desiring to sacrifice its units or allow them to die to generate boosts and thereby more powerful units.
This is probably to date the most economic faction, all about a cycle of reap and sow that is happy to spend time summoning units only to sacrifice them to produce boosts that are used to produce Fungal Beasts.

A deck happy to take its time and that will inevitably out-value every other faction out there.

However, no opponent will just let them do that and so Fungal Dwarves need to accept the inevitable engagement … and they do so by using the death of units on both sides as part of their engine of fungus and beasts.

The deck has its summoner,  Kuldak as its central focus, since most boost production will come from his extremely powerful ability Blood Bloom.

This ability is arguably the most powerful ability of any summoner. However it requires a deck and playstyle 100% focused on it, and games with the Fungal Dwarves will inevitably revolve around this ability. Fungal Dwarves will try to trigger it as much as possible during the course of the game and the opponent will try to prevent it from triggering as much as possible.
Fungal Dwarves have a lot of ways to chain deaths into boosts that produce deaths that produce boosts. Creating a chain of boost explosions to permeate their colony. If the engine starts, the amount of economic advantage they can gain can seem insurmountable. 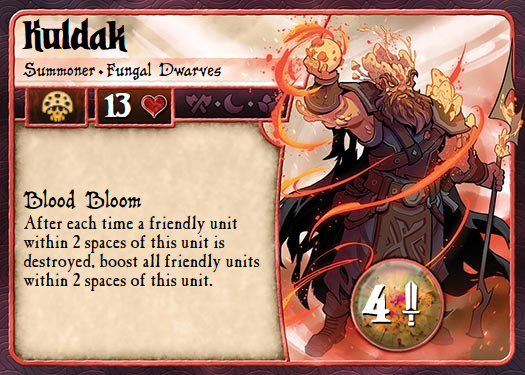 Kuldak has great stats, however he’s ultimately a support summoner. As mentioned, Blood Bloom is arguably the strongest ability the game has so far presented for a summoner.
A fungal colony needs to be formed around Kuldak, both to protect him as the king piece and to be able to trigger Blood Bloom.
The placement of Kuldak is crucial and will determine the flow of the game, knowing where to place Kuldak is without a doubt the hardest skill a Fungal Dwarf player needs to master to play effectively. “Where should I move Kuldak (or not at all)?” is the most important question a Fungal Dwarf player needs to answer every turn. 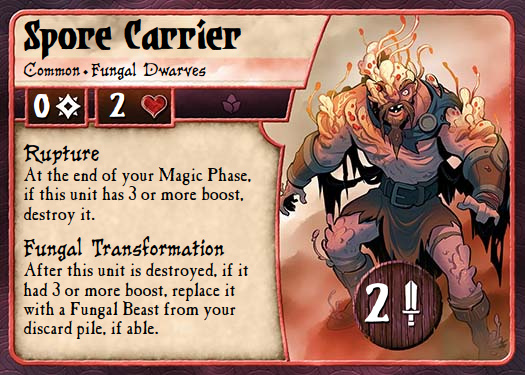 The key unit of the Fungal Dwarves. Blood Bloom generates boosts, but you need to use them, and the main use of the boosts are the Spore Carriers, with 3 boosts making these inexpensive 0 cost units into very efficient Fungal Beasts.  Fungal Dwarves want to quickly populate the board with these cheap units to both have a use for the boost and have a cheap way to trigger it. Try to summon as many as these as possible, they are good to trigger deaths, good to use boosts, and very efficient on their own as 0 cost 2/2 is great stats.
Don’t be afraid to kill them yourself with your own attacks to trigger Blood Bloom. 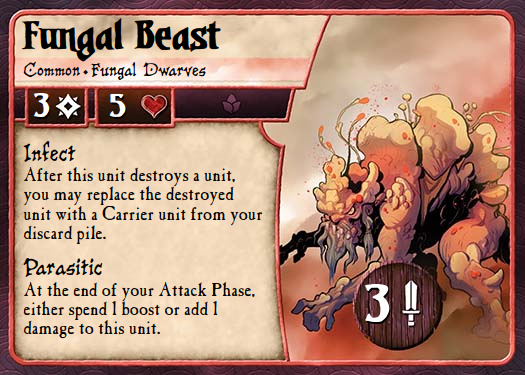 The inevitably linked-to-Spore Carriers-unit is the Fungal Beast. Spore Carriers turn into Fungal Beasts. Fungal Beasts are actually very good units on their own if they can get a kill when they are in play, which is not hard with their 3 melee attack strength. This is the core force of the Fungal Dwarves. Their only weakness is that in a passive game they slowly start to decay but they shouldn’t decay much in an active battlefield.
Remember you can attack a Spore Carrier with a Fungal Beast, creating a fresh Carrier AND triggering Blood Bloom! This is the main way Fungal Dwarves can use their free attacks in a more passive game. But also in an active game you can do the following trick:
Attack with a Spore Carrier, kill that Carrier with your own Fungal Beast, then attack again with the fresh Carrier. This allows the faction to use all 3 attacks even having only access to a single flank of attack.
Tricks like this is what makes Fungal Dwarves the master of slow paced games. 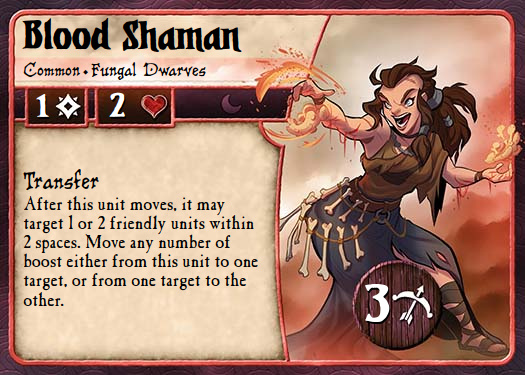 A support unit that is actually pretty good in combat.  Try to have one Blood Shaman always active on the battlefield, even if you don’t use it’s ability, they are a capable combat unit, but having the option to move a bunch of boosts to a more optimal place is very powerful and needed to create new Fungal Beasts from Spore Carriers or put enough boosts on a Beast to be able to summon the Monstrosity. 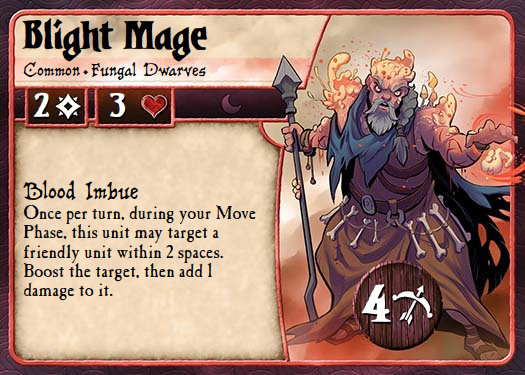 Blight Mages are kind of like plan B, as they are not a key part of the Fungal Dwarves’ engine like the previous 3 units. They are however a very safe bet that offsets the faction’s weaknesses. Blight Mages give Fungal Dwarves a very powerful ranged unit that has great stats and does not depend on the engine to be valuable. Don’t think you need to use their ability to summon Blight Mages as they are extremely efficient combat units. Consider Blood Imbue just a bonus that comes in handy sometimes. 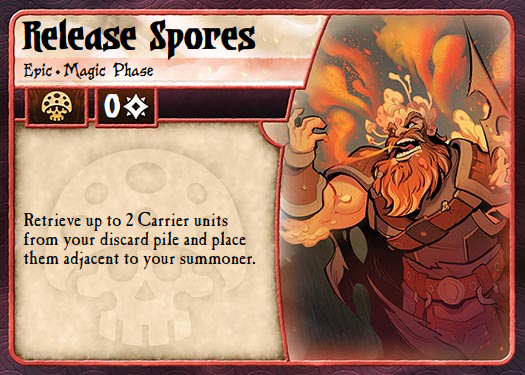 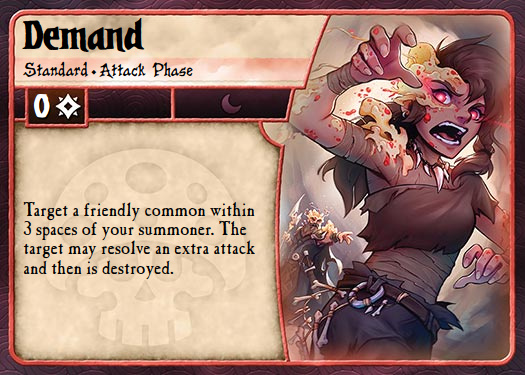 Perhaps everybody's favorite event, and yes, it’s very powerful. Extra attacks are always great, extra from the same unit, are even more so. It’s negative - losing the unit, can be a bonus for the Fungal Dwarves which like to see their own units dying, even more so if it’s to make a Spore Carrier die before the end of turn to become a Fungal Beast.
Remember you don’t need to choose a unit that already attacked, so it can allow you to attack with 4 different units. 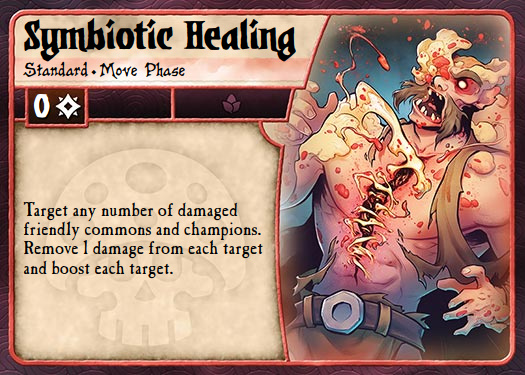 A very situational card. The reason is that it is hard to have multiple units that are damaged. But with just 2 targets it’s already good enough, and even with 1 target it’s still playable.  You don’t need to find that dream of choosing 4 targets. It also can allow you to trigger Blight Mages without care that turn just for extra boosts. 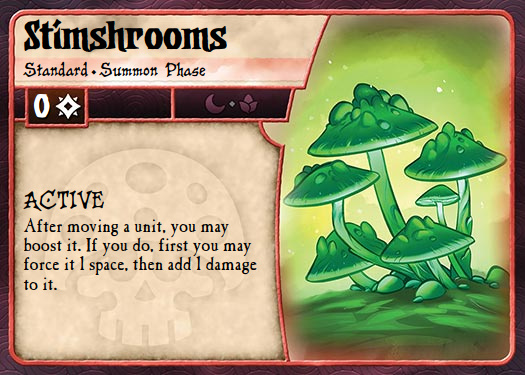 Though Fungal Dwarves are not happy to spread out typically nor really want reach most of the time, Stimshrooms provide an undeniable threat in their deck. The opponent must be ever mindful that a Stimshroom-empowered unit does not have reach to where they were not expecting.
You don’t need much from this event to be worth it. If thanks to Stimshrooms your Fungal Beast can reach a target that will become a Spore Carrier, often that is all that is needed to justify playing this card. 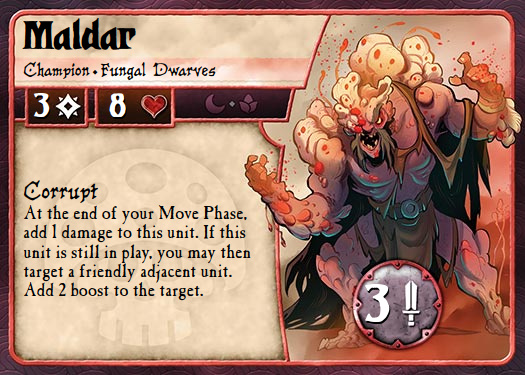 While Maldar is not the most powerful champion, it is definitely the most versatile and you will probably play it every game. It's cheap cost and good stats make it almost a must play. Its ability though is VERY powerful. Yes it requires a lot of positioning finesse but you don’t need to trigger it too many times to gain great value. Summon Maldar for cost and stats, then if you can put 2 boosts on a couple of Spore Carriers, all the better. Don’t be afraid to use it mostly as a boost production tool either, putting out 16 boosts for 4 magic is more than good enough if that is what you want to do and you are able to. 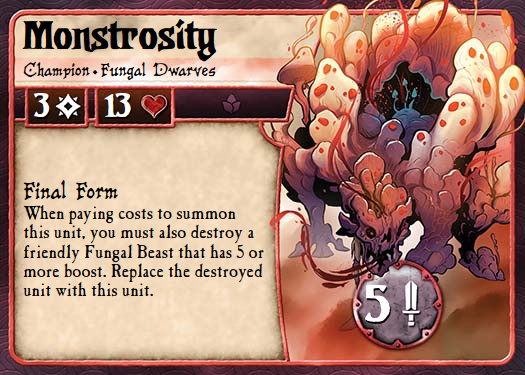 The big payoff of the Fungal Dwarves. It can be hard to pull it off, Monstrosity requires a lot of work, but the end result is worth it. Generally these guides don’t feature “current opinions of the playerbase”, but an exception is being made here because Monstrosity is quite possibly the most divisive Champion released so far. Some players worship Monstrosity as a key unit of Fungal Dwarves and play every game with the goal of getting it out, and then other players consider it a great but very situational - optional card.
It’s up to you to decide the right path on this one for yourself. But regardless if it’s worth pushing for it or just spotting the right time for using it situationally, it’s undeniably a game-winning condition of the Fungal Dwarves. 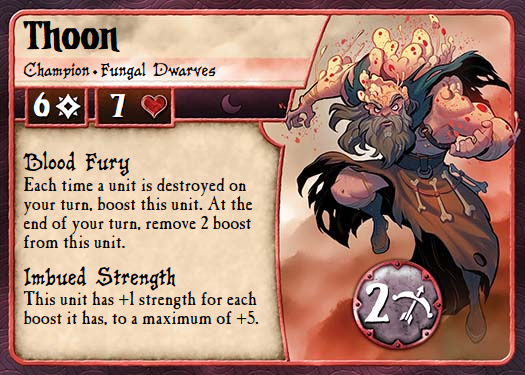 Thoon is a “self-centered” champion. This is a champion that can win the game by himself but needs a lot of support. The key to making Thoon a star is to bring him into play, and use Blood Shamans to instantly give him lots of boosts, so that you can keep a 7 strength ranged attack. If you have that support and the magic, then summoning Thoon can be game winning. But if you don’t have the Shaman + boost to spare at the moment Thoon is in your hand, then you should probably pass on him.
Fungal Dwarves are the most economic faction in the game, with an easy appeal for those that like to play economic engines. As a result, this faction tends to produce slow, “grindy” matches with oftentimes gigantic / complex board states.

With Kuldak as the centerpiece of a blob of spores and fungus, a lot of the Fungal Dwarf gameplay decisions are about where Kuldak needs to be, and how to maximize boost / Beast / Carrier reproduction.

If this appeals to you, Fungal Dwarves provide one of the most unique experiences by far in Summoner Wars to date.
Copyrights for the Summoner Wars logo and art belong to Plaid Hat Games, used herein with their express permission.
PlaidHatGames.com