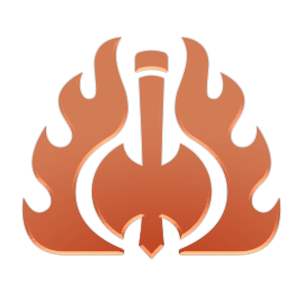 Obsidian Dwarves Fire/Primal is represented in a deck of unstable power. Balzar, its summoner, has one of the highest peaks of power but also one of the lowest lows. Its power varies during the game and a player needs to adjust to its state.
Balzar has boosts that represent its "Anger", which translates into power. These boosts can be used to release its powerful epic event, perform powerful attacks, or use the most powerful abilities. This cools him down and he needs to generate boosts to raise his "Anger" state again.
Obsidian Dwarves is an aggressive deck, but not a frenzied one. It is a deck about pushing forward slowly but surely, faster when the power is high and slowing down when the power is low.
This is a highly tactical deck, defined by changing gears from full power to low cooldown, then back to full power again.
Obsidian Dwarves need to push forward, they don't need to be fast, but they need to slowly advance towards the enemy summoner. The deck starts with low cooldown, and the way to get heated up is to attack with Balzar or the Oath Sworn, one of its common unit. In the early game, the focus is generally on getting as many boosts as possible while handling the opponent's moves.
Once a large number of boosts have been accumulated, the pressure can begin. Not only is Balzar's high damage a threat in itself, but its epic effect is incredibly strong and the opponent must account for it. This effect is capable of destroying armies, decimating clumps of gates, and taking down the summoner and its defenders. After that, Balzar can use Ember Guards to protect himself.
If the boosts run out, the process should start again.
There is also a secondary threat from Berserkers leading the charge, with Ember units easily appearing on the front lines thanks to their "teleportation" abilities using boosts for a surprise attack. Both can be enhanced with Hellforged weapons for significant damage. 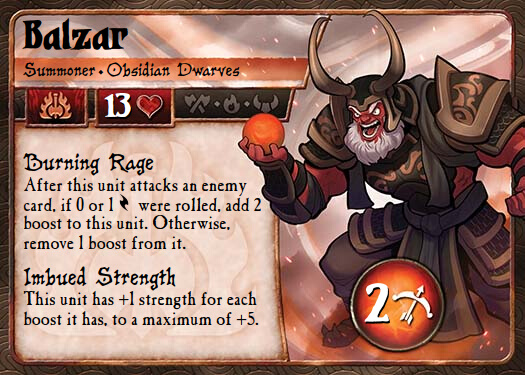 Balzar is the centerpiece of the deck, and its boosts and life will largely determine the course of action. Balzar should be slowly but surely moved into enemy summoner territory as its biggest weapon is the threat it represents to the enemy summoner. Its Epic, Volcanic Blast, makes it extremely difficult to defend against its advance to kill the summoner. Due to Balzar's crucial role in the deck, it should generally be played conservatively, with Ember Guards used to protect it. 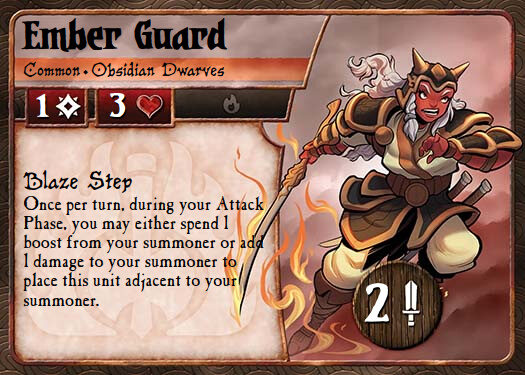 Ember Guard is a key unit for the deck, as Balzar needs to be on the front but also protected. Ember Guard serves as an invaluable support to Balzar, offering protection after normal attacks and Volcanic Blasts, and allowing Balzar to bring reinforcements to the front by serving as a gate for Fire demons.
Here are a few tricks to keep in mind regarding Ember Guards:
Ember Guards can be summoned even if there is no immediate use for them, as they can teleport to Balzar on a later turn if needed. They are so useful that it's hard to not find a use for them, so they should more often hit the field than the discard pile.
They can be used for hit-and-retreat tactics, for instance, to kill a unit but keep it safe, especially if equipped with a weapon. If the guard has only 1 life and is going to die on its own, it may be better to make it retreat than give the opponent magic.
Ember Guard's ability can be used at any time during the attack phase, allowing the following sequence of actions: attack a card 2 spaces away with Balzar, then teleport the Guard and attack with the Guard. 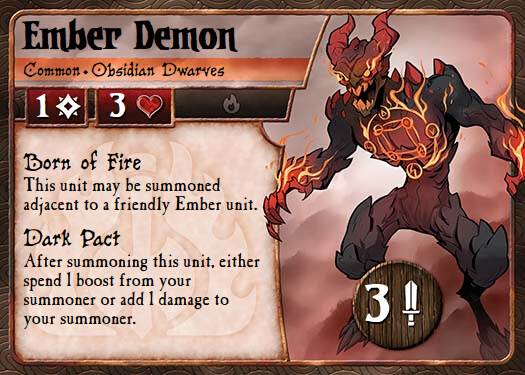 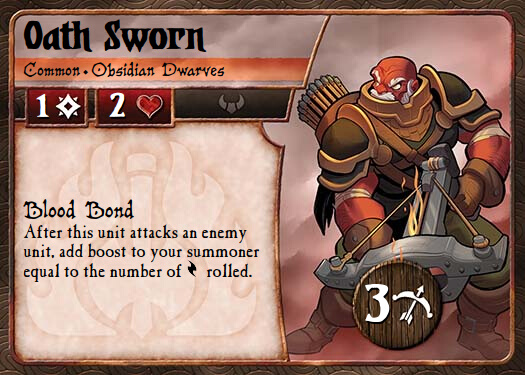 The Oath Sworn is the economical common unit in the Obsidian Dwarves deck. With its cheap cost, it's a secure way for Balzar to generate boosts. However, its 3 ranged attack for 1 cost makes it a versatile unit to summon for ranged damage. If you're not sure what unit to play, the Oath Sworn is often a safe choice. 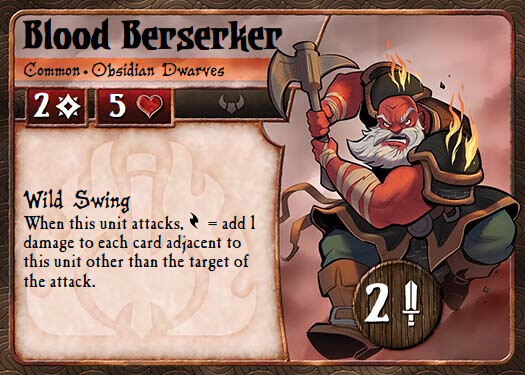 Blood Berserker is a frontliner unit in Obsidian Dwarves deck. As they are a pusher faction, Berserker is crucial to absorb damage while the other units move into position. Berserker is tough and has unique attributes compared to other tough units. Its power lies in being a good gate blocker, as the hitback from removing it at melee range will cause damage to the gate. If multiple units are used to remove Berserker and fail, it can be dangerous due to its multi-target ability. 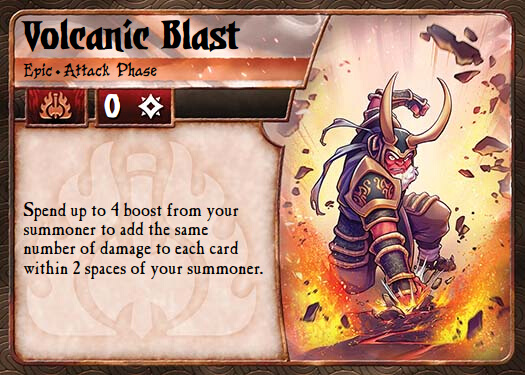 Volcanic Blast is a powerful and highly valued epic card in the Obsidian Dwarves deck. It has the potential to deal significant damage and end the game when played correctly, but also serves as a threat that influences the opponent's strategy. It requires careful setup and mastery to use effectively. It's important to keep in mind that it can also be used for utility purposes, such as finishing off units, removing blockers, damaging multiple units, or hitting important gates. The option to play two Volcanic Blasts in one turn adds to its potential for devastation. 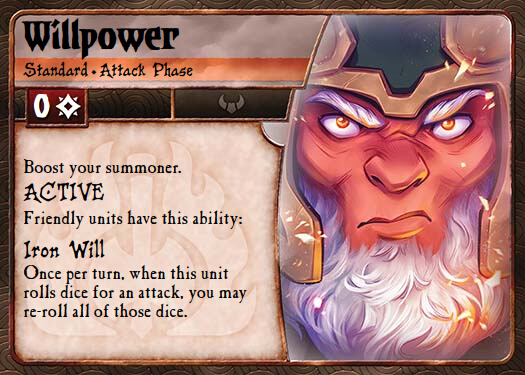 While the deck is based on unstable power, Balzar can create a moment of controlled power with the help of his willpower. Willpower is a highly valuable  tool that offers Balzar a secure turn. Balzar focuses on creating explosive turns, and willpower enhances the certainty of these explosive turns. The boost is an integral part of the effect, making the event extremely cheap and should be used without any reservations. 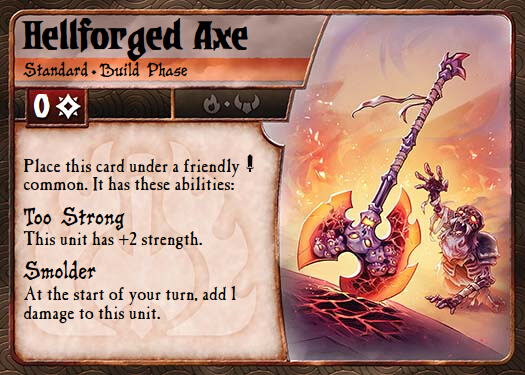 The Axe is a simple card that adds more damage. Demons can use it for surprise damage, Ember guards for hit and run tactics or focus damage along with Balzar. Berserkers should use it for those times when the opponent lets a Berserker roam free. 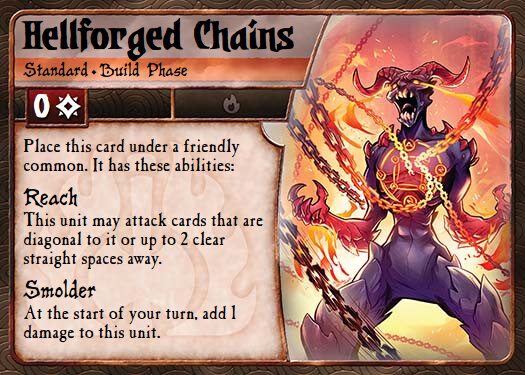 Hellforged Chains is a situational card. It should not be used as often as other cards but it does address certain problems in the deck, mainly the lack of reach and surprise. Without Chains, it wouldn't be difficult to position units safely against Balzar. However, the threat of Chains makes it so that very few spots are safe. Berserkers like to use Chains to hit multiple targets, Ember Demons use it to reach hiding targets, especially when combined with Axe. Ember Guards can also employ hit and run tactics and hit units between gates, even their own gates. 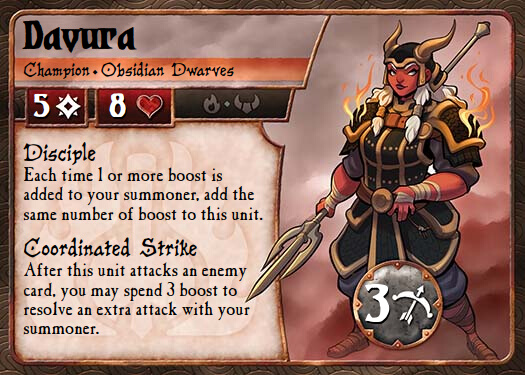 Arguably the safest bet for a champion, Davura can be extremely powerful if Balzar can be active enough. It requires Balzar to take on a very active role, and when it does, its expected value skyrockets. Only bring her out if you know you will be able to attack with Balzar enough. 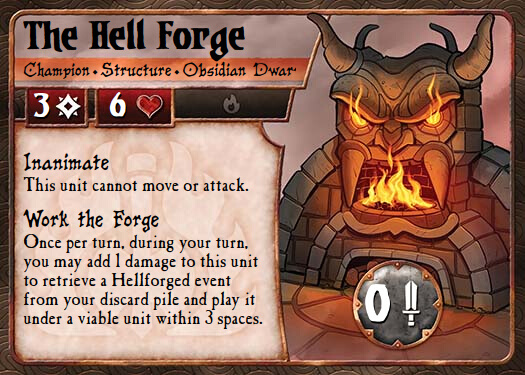 The Hell Forge is a unique champion that fits perfectly into the Obsidian Dwarf strategy. It allows Balzar to have a front-line weapon that can greatly enhance the effectiveness of your pushes. When placed in a strategic location, The Hell Forge can provide very efficient value to your common units. 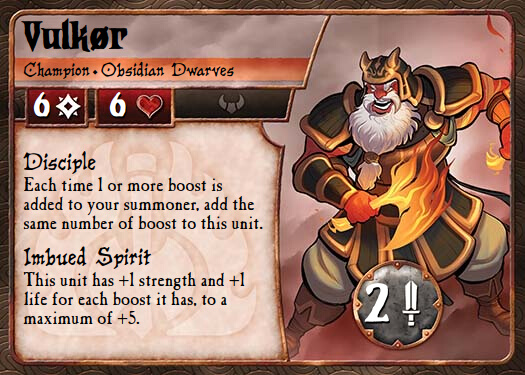 Arguably a situational champion, Vulkor's value depends on how quickly you think you can max him out. You will usually do so with Oath Sworn and Willpower. If you believe you can max him out quickly, he is an extremely efficient champion to bring out against any opponent. However, if it will take several turns to max him out, it may be better to discard him.
Obsidian Dwarves is a tactical and straightforward deck. It focuses on pushing when strong and slowing down when weak. It does not have many complicated tricks like other factions, nor does it have dramatic strategic decisions that require adapting to new situations. Obsidian Dwarves has a single strategy that switches between two gears.
It is the most focused summoner deck so far as it does not have a strong plan B, unlike other summoner-focused decks. If Balzar can't perform, the deck falls apart more quickly than others. Obsidian Dwarves does not have a strong ranged game, relying on Balzar's ability to provide cover and gates to protect its units and the opponent's summoner.
On the other hand, Obsidian Dwarves is a very tactical deck. Though its goal is straightforward, achieving it requires methodical precision. The winning move is often found in a well-placed Balzar, gate, forge, or common unit.
Obsidian Dwarves must advance slowly but methodically with high tactical precision. If it moves forward effectively, it can feel like an unstoppable wall of fire and destruction with an inevitable outcome of Balzar blasting everything, including the opponent's summoner.
The slow and methodical advance of the Obsidian Dwarves can be highly satisfying. If you enjoy this type of gameplay, Obsidian Dwarves can be a lot of fun. However, a single misstep can leave Balzar hurt and the Obsidian Dwarves with little hope of winning. But when you successfully corner the opponent's summoner into blast range and press the button to nuke everything, it is highly enjoyable and satisfying. And then you realize you can fire it again. Nuke to win.
Copyrights for the Summoner Wars logo and art belong to Plaid Hat Games, used herein with their express permission.
PlaidHatGames.com